Was ‘It: Chapter Two’ a Disappointing Sequel? 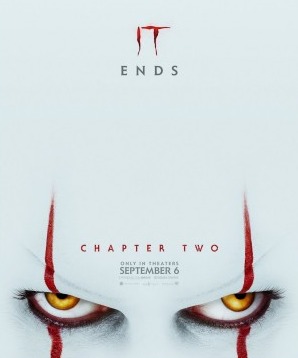 After the initial showing of the blockbuster film, It Chapter 2 on September 6, 2019, there were many controversial opinions over the quality of the movie. It 2 was the sequel to the first movie which was released September 8, 2017. The original film was praised for being a great film adaption to the Steven King novel, The sequel takes place 27 years after the original film, where the protagonists have to return to their hometown to try and kill the evil entity that resides in their town. However, many feel that the new movie did not live up to the standards of the original. Fans feel as though the sequel was not as creepy as the original movie, and instead relies more on jump scares and mediocre special effects to spook the audience. Instead of having scenes with a lot of tension that builds up fear, the audience is just hit with one jumpscare after another. Along with the constant jumpscares, the CGI of the movie is just not up to par with most recent movies. CGI stands for computer-generated imagery, widely practiced in horror movies today.  The monsters are just not as scary when they look fake. The original movie had excellent CGI and creepy scenes which made it much better in fans’ opinions. Additionally, due to the fact that the kids who were in the original movie have aged dramatically since the original films premiere, the use of CGI to de-age the actors doesn’t look right. One common link between both movies is that the actors are great in the movie. Actors such as James McAvoy and Bill Hader brought up the quality of the movie. Another good part of the movie was that the plot was easy to follow as it generally followed the book through a large extent of the film. In conclusion, though the movie had some bad scares and worse CGI, it was made up for with a good plot and actors. People have their own opinions on the movie, those who were huge fans of the first movie thought that it was a great squeal. On the other hand, those who saw the movie for the fright aspect were greatly disappointed.